The NC relayers play an important role in relaying interchain packages from BC to NC. All NC relayers build their stable infrastructure, watch any event happened on the NexDAX Chain, and act timely to get paid accordingly. The following discussion is about how to distribute the rewards to let the relayers are willing to make a long-term contribution.

It is tough hard to achieve all these goals; we make some trade-off on robustness and low risk in the following design.

We have three reward source:

The role of relayers and their rewards comes from: 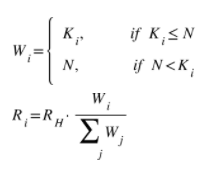 We consider setting these parameters a reasonable value:

In each round, the last package delivery transaction will trigger the reward distribution. Both the header reward pool and package reward pool will be distributed. However, the reward won't be paid directly to relayer accounts. The distribution algorithm just calculates rewards for all relayers and write down the amounts. Relayers are required to actively send transactions to claim their own accumulated rewards.

The system reward pool can hold at most 100NT for example, to prevent the pool get unnecessary income.

The client needs to query the balance of the contract to decide whether to distribute 1/16 of the transaction fee to the contract or not. It seems not that fair that some validators pay more to the reward pool than others, but this is random and will eventually become fair in the long run.

If there are not enough rewards in the pool, all the tokens in the pool will be distributed.

For example, a relayer may deliver packages using a different address in round robin, we can’t recognize this. We try to introduce registration and NT deposit for relayer to raise the cost of cheat. How it works: